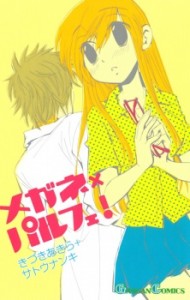 This is the first thing I read for the 2016 Manga Reading Challenge (Read a manga that has a main character of gender opposite to the demographic) because when I looked at the cover I liked the art style.

The story is really simple since it's a manga with only 6 chapters: a girl, Misao, joins the " White Labcoat and Glasses" club because his senpai (Kyutaro) is there. She first meet her senpai some time before and now she is searching for him. She finds him and discover that she has a strange disease for labcoats... but that's not all. She decided to help his senpai in an experiment of love... but the senpai isn't the other that takes the experiment. She will do the experiment with senpai's younger brother (Ojiro)! Will she fall in love for his brother of she will prove that senapi's experiment is a failure and continue to love him?
Well... talking about the story like this is surely interesting but I found the first 2-3 chapters really boring. I continued reading them to complete the challenge but I think that this manga is nothing special and sometime it's really rushed and confusing.
The characters... well, the only one that is interesting is senpai's younger brother. At first he hated our main protagonist but slowly he fallen in love with her. Misao is funny but he stay the same until the end and sometimes seems that she can't feel any kind of "love" emotion... and Kyutaro... he only loves his experiments...
The are is nice, surely nothing like a shojo since here the eye style is really simple but the drawings are cute like that. There are some screen tones but not a lot. It's a nice style but nothing excellent.
This was a nice read but nothing that I really enjoyed since the first chapters were really boring and only at the end the manga started to be intresting. And we have to add that something was really rushed and confused...

Ehhh... the first chapters are boooring.... but the ending is... well, let's say that nothing happened.
At first Misao and Ojiro starts dating but it's clear that there's nothing between those two... they don't act like a couple. And in the end... we return to the beginning with Misao that still loves Kyutaro but he don't say anything... and with Ojiro that loves her but we can't understand if he still dates her or if he must declare (again).

This website uses cookies to improve your experience while you navigate through the website. Out of these, the cookies that are categorized as necessary are stored on your browser as they are essential for the working of basic functionalities of the website. We also use third-party cookies that help us analyze and understand how you use this website. These cookies will be stored in your browser only with your consent. You also have the option to opt-out of these cookies. But opting out of some of these cookies may affect your browsing experience.
Necessary Always Enabled

Any cookies that may not be particularly necessary for the website to function and is used specifically to collect user personal data via analytics, ads, other embedded contents are termed as non-necessary cookies. It is mandatory to procure user consent prior to running these cookies on your website.