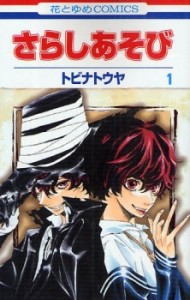 Another manga that I have read for the challenge (read a manga published between 2000 and 2010). I wanted to read this one since the synopsis of the manga was interesting... and...

The story starts with a bored shinigami that seek enjoyment and took an interest in a human girl, Ren, that hasn't many days to live. Ren is the student council president and is feared by everyone at her school because of her harsh way of speaking but in reality she is really good-hearted. Our shinigami, Ai, will possess her body and help her expose her true nature.
When I started the first chapter I was really happy that I found an interesting manga (since the previous one, Megane x Parfait!, was boring) but after the second chapter the manga slowly become boring and with not really much interesting things to read. But at least the last chapters are good. nothing epic since you can guess what's happening but it's good. And the "game to expose" Ren's true nature is used only in the first chapter and not really much in the next chapters... that's why I enjoyed much more the first chapter and still think that this series is better as a one-shot and not a serialization.
About the characters, I think that they are good. They are the classic shojo characters. Ok, our main character don't want the usual prince but she slowly discover that she loves Ai and she chnaged since everyone now know that she isn't a demon (but still talks harsh) and Ai starts do fall in love with Ren.
The drawings.... eh... here is difficult... they are good but I really don't like how the author drawed Ai. He has a really different drawing style... that aside, the drawings are good and nice to look.
Like I said, it was a nice reading that started really well, got boring and ended well... I was really happy that the series was 7 chapters long (they are enough for this story).

There's not really much to talk about the story... I'm only happy that Ren and Ai are now together (and that he is human now).