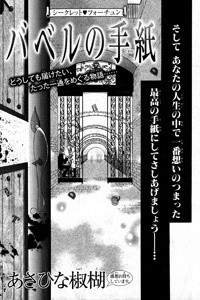 And.. here's another one-shot XD (this time it's good XD)
Why I started reading it? Well... because of the title: Babel. No, it has nothing to do with the Tower of Babel... and I was sad for that XD but the chapter was good so, let's start with the review!
The story is really simple: our main character, Babel, can write any kind of letter for his customers. One of them ask him exaclty to do that, to write a love letter. And here starts this little one shot: Mikhail, the client, starts to tell his story. He was a steward of a lady called Sonya. the girl wanted them to be friends but Mikhail always stayed loyal to his duty and on her 18th birthday, her marriage was announced. Well... there's more but that's spoiler XD so if you want to know how the chapter ended, go and read it! XD
The characters are really well made, nothing special, they are really simple but they are nice. And Babel until the end is a mystery XD
The art is nice too. Good use of the screen tones and of the panels. The drawings are really detailed too. I really liked this kind of style.
For a one-shot, this one was really good.

And now I can spoiler XDDD
I was really sad when Mikhail said to Sonya that he won't help her go away from that marriage! I don't know what he was thinking but one thing is sure: she loved him. And even now she loves him. Or at least I like to think that XD
As for Babel, the first time I have read this chapter I thought that somehow he killed the old Mikhail but reading again the chapter I changed my mind. Now I think that Babel talked with the ghost of Mikhail that wanted to tell Sonya his feelings before disappear. Whatever happened to him, at least his letter reached Sonya and that made me happy reading those final pages.